Geneva, July 3rd, 2019 : TradeMark East Africa (TMEA) has today signed a $3.14 M financing agreement with the United Nations Conference on Trade and Development (UNCTAD) which is aimed at ensuring that EAC countries comply with the WTO Trade Facilitation Agreement (TFA). The agreement was signed by TMEA CEO, Frank Matsaert and the Secretary General of UNCTAD, Dr Mukhisa Kituyi in Geneva.

The initial TradeMark East Africa (TMEA) and United Nations Conference on Trade and Development (UNCTAD) Financial Aid Arrangement was signed in 2015 and implemented from early 2016 with three components : (I) Trade Facilitation (TF) ; (II) Trade Portals and (III) Gender. The main objective of component I was to assist in setting up the institutional environment for Trade Facilitation in five East African Community (EAC) Partner States (PS) ; Burundi, Kenya, Rwanda, Tanzania and Uganda. The main activity was focused on creating the National Trade Facilitation Committees (NTFCs) in the five mentioned PS and to empower them through a capacity building program allowing them to coordinate and supervise their national TF processes, including implementation of the World Trade Organisation Trade Facilitation Agreement (WTO TFA).

The main achievements of the capacity building program were WTO TFA ratification by Kenya, Rwanda and Uganda and the notification of A measures by the EAC PS in 2015 and the B and C measures for Rwanda in June 2018. As of 2017, the five EAC countries have had their NTFC legally established and operationally functional. The current cooperation agreement was foreseen to end in December 2017. However, due to several delays at national levels in the three components composing the project, an official request for an extension until September 2018 was agreed by TMEA in December 2017.

Given the renewed commitment by EAC PS to make trade cheaper, faster and simpler, TMEA and UNCTAD signed a Letter of Intent to further its cooperation through a second phase in December 2018. The objective of Phase II is to build on the results achieved during the first phase and support EAC PS to address remaining challenges to fully comply with the WTO TFA measures through :

Enhancing the role and capacity of the National Trade Facilitation Committees (NTFCs) as coordinating entities of trade facilitation reforms and simplification of trade procedures that complement trade policy ; Building the capacity of the NTFC and its members to create and manage sustainably an enquiry point offering information and assistance to traders ; Enhance transparency of trade procedures through the Trade Information Portals ; and Strengthening the capacity of the EAC Sub-Committee on Trade Facilitation to drive national and regional trade facilitation initiatives. Speaking at the signing UNCTAD Secretary-General Mukhisa Kituyi said,

“Trade has surged in the region thanks to our work together. We look forward to building on our joint achievements in facilitating reforms that are stimulating trade both within and beyond the region.”

“Our partnership has helped the countries in the region to put trade on an upward trajectory. Through our joint commitment, we’ll achieve even more success.”

The African Economic outlook (AEO) 2019 notes that Implementing the TFA would increase trade gains to about 4.5 percent of Africa’s GDP, or an additional $31 billion, bringing the total real income gains to $134 billion”. The report further notes that for regional economic communities to gain maximum benefits of the TFA it requires “cooperation between governments and people : to foster peace and security, conserve shared natural resources, develop and manage regional infrastructure, and share systems of rules and policy regimes. Integration thus provides regional public goods. These forms of cooperation call for collective action, which requires trust and some supranational delegation of authority.

TradeMark (Trade and Markets) East Africa is a multi-purpose donor funded, not -for-profit Aid for Trade organisation, established to support the growth of trade – both regional and international – In East Africa. TMEA operates on a not-for-profit basis and is funded by the development agencies of the following countries : Belgium, Canada, Denmark, Finland, Netherlands, Norway, UK, and USA. TMEA works closely with East African Community (EAC) institutions, national governments, the private sector and civil society organisations.

Established in 2010, TMEA supports a portfolio of programmes across the East Africa Community partner countries, working closely with our partners – the EAC Partner States, EAC Secretariat, the private sector and civil society – TMEA has made a significant contribution to this growth by delivering large scale impact in its highly successful first strategic phase which was completed in December 2017.

TMEA Is now embarking on Its second strategic phase for the six years from 2017/18 to 2022/23 known as “Strategy 2” which seeks to increase trade by unlocking economic potential anchored on 2 key outcomes :

TMEA has its headquarters in Nairobi with offices in Arusha, Bujumbura, Dar es Salaam, Juba, Kampala and Kigali.

To find out more, please visit the TMEA website at www.trademarkea.com 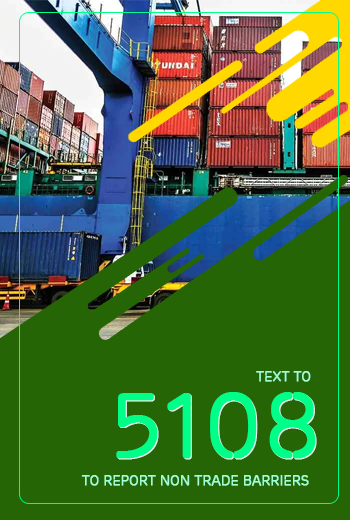